An expedition to the world's highest peak 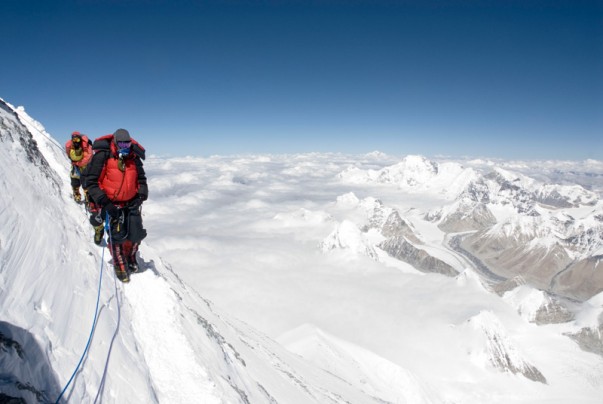 The highest peak on Earth can be found in the Himalayan mountain range, in the north of the Indian subcontinent. It is located on the border between Nepal, the only Hindu kingdom in the world, and Buddhist Tibet, which was incorporated as an autonomous region into the People’s Republic of China in 1950. This indisputable fact was not always known. Between 1745 and 1818, the highest peak in the world was considered to be Chimborazo (6287m), a volcano in the Andes, located in Ecuador. In the mid-19th century, the British conducted measurements in India and the Himalayas, and between 1818 and 1848 Dhaulagiri in Nepal was considered the highest mountain on Earth. From 1848 to 1852 it was believed that Kangchenjunga in Sikkim was the highest. 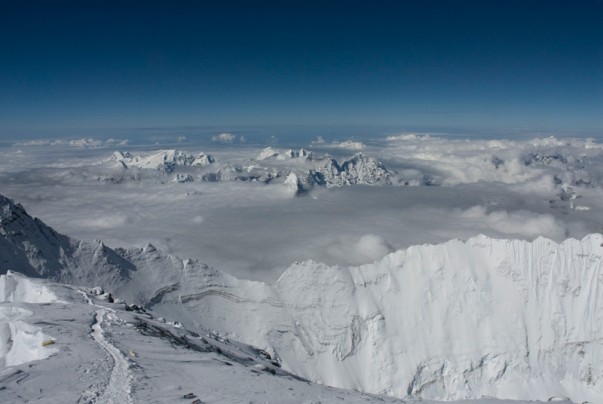 Considering how difficult it was to approach the Himalayan peaks, topographers working for the Indian mapping agency “Survey of India” identified one especially high peak in the Himalayas by conducting observations from the Indian jungle at lower altitudes. This peak was marked as Peak XV. Finally, in 1852, calculations based on land surveys confirmed that Peak XV was higher than any other peak known at the time. The measured altitude was 8840m. That is how the world’s highest peak was discovered. Nobody knew the name of the peak. It was suggested that it be named Deodungha or Ghaurisankar. In the end, it was decided that it should be named “Mount Everest”, after Sir George Everest, Surveyor General of India from 1842 to 1843. Whatever its name – be it Peak XV, 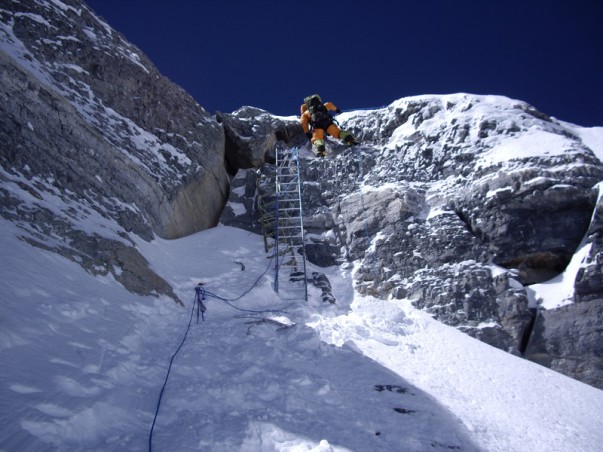 Chomolungma, Sagarmatha or Everest – the fact remains that this 8850m high mountain is the tallest in the world and it represents a border between Tibet to the north and Nepal to the south. It is located 150km northeast of Kathmandu, the capital of Nepal, and 450km southwest of Lhasa, the capital of formerly Lamaist Tibet. The border runs along the western ridge, across the peak, and then along the southeast ridge. The mountain consists of the west ridge, southeast ridge, and the two branches of the north ridge. Between them are the north face, east face and southwest face. Largely thanks to Mallory and like-minded people, Mount Everest became a testing ground for adventurous spirits. This form of testing continues to this day. The British sent out their first team of mountaineers on a reconnaissance expedition in 1921. Due to the mountain’s remote location and its ruthless peaks, it took 32 years and 8 different expedition attempts before Sir Edmund Hillary and Tenzing Norgay struggled down the mountain, proclaiming their success. “We knocked the bastard off!” Hillary shouted with elation. Later, and somewhat surprisingly considering his previous statement, Hillary said that Everest does not recognize conquerors, and that those who have managed to reach the summit have done so only thanks to the will of the mountain. 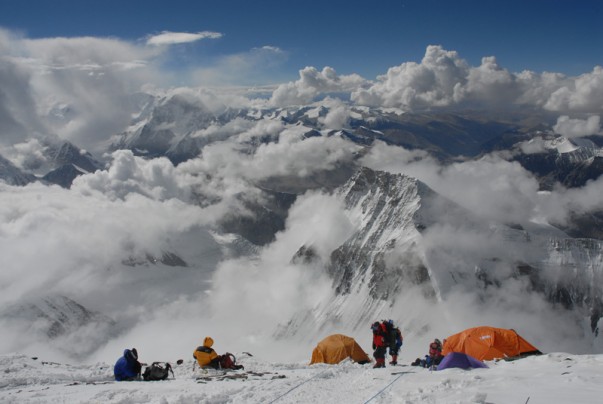 For the 2020 season we are offering a full service expedition

Included in the price are:

All our high-altitude Sherpa have Everest experience.
They bring all shared equipment and oxygen cylinders in high-altitude camps and accompany team all the way from ABC to the summit.

Our expedition starts in Katmandu: we are all meeting in the “Samsara Resort” hotel March 30. We will have transfers from the airport to the hotel for those arriving with later flights.

Land cost includes:
Tibet visa
Climbing Permit
Necessary transfers in Katmandu
Bus and truck for the loads to Zangmu and back
Jeeps and lorry for the participants of the team from Zangmu to BC and back to Zangmu
1 Yak per expedition member BC-ABC and 1 Yak per member ABC-BC
Hotel in Katmandu “Samsara Resort” for 4 nights in double rooms (BB)
All hotels in Tibet
Food in Tibet
Food in the the BC, IBC, ABC – 3 times a day and for the ascent (high camps food)
Tents for the participants and maintenance staff in the BC, IBC, ABC and the high camps
Tent-kitchen in the BC, IBC, ABC, tables and chairs
Fuel for preparing food in the BC, IBC, ABC
Kitchen equipment and dishes in the BC, IBC, ABC
Electricity generators for BC and solar panels for ABC
First-aid set
Chinese liaison officer
Nepalese cooks
Tibetan kitchen-boys
Gas-cylinders (250gr.) only for high camps
Tents for the high-altitude camps
Ropes
Ice screws
Walkie-Talkie
1 Team T-shirts

We can organise this expedition on a ‘tailor-made’ private basis for groups of friends, families, clubs, charities or any other group. Depending on your mountaineering experience, you may want a Extreme Summit Team leader or go ‘self-led’ with the assistance of local guides. The cost of going private can be surprisingly reasonable, particularly if you take the self-led option. Please contact us to discuss the itinerary and your preferred dates. We will then send you a quote, with no obligation

Necessary additions
Climbing on Everest is dangerous at any time. Noon can give you 100% guarantee of your safety at altitude above 7000m and especially above 8000m. So we include in price personal high altitude Sherpa-guide for summit attempt. It is useful, especially if you have no previous experience of climbing above 8000m. This will several times multiply your safety and chances on successful summit.

Meals
Breakfast in Katmandu (lunch and dinner are not included)
Food in Tibet – 3 times a day in restaurants
Food in the BC, IBC, ABC – 3 times a day. The food is prepared by Nepalese cooks and Tibetan Kitchen-boys on gas stoves in special kitchen tents. You can also get here any amount of hot water for washing or boiled water for drinking. We eat in spacious dining tents equipped with tables and chairs.

Food for the ascent – We provide special dehydrated western mountain food, which you have to prepare yourself in high camps (above ABC) on gas stoves. Water should be melted from snow.

All our high-altitude Sherpa have Everest experience.They bring all shared equipment and oxygen cylinders in high-altitude camps and accompany team all the way form ABC to the summit

Medicine and medicine insurance
We will have Doctor in BC.We provide a big expedition first aid kit with all the necessary medicine, but we also recommend that you bring your own specific medicine.

NOTE:
Each member must have “Climbing” medicine insurance for whole expedition period.

Weather
In Everest region the weather is very changeable. Every day we get new weather forecast by Internet and choose the best period for acclimatization and ascent.

Personal high-altitude Sherpa. Personal guide
If you have not enough experience and you want to increase the chances for the summit and safe descent you need help of extra one personal Sherpa or even personal guide, who will work with you during all expedition from BC to summit:
The price for extra one personal high-altitude Sherpa for carrying your personal stuff from BC to high-altitude camps, accompany you from BC to high-altitude camps during acclimatization period, accompany you all the way from BC to the summit is 5000 USD (include oxygen equipment,personal equipment,all the bonuses and salary for the expedition)
Personal western guide (Everest summiter) – 40 000 USD
(include oxygen equipment,personal equipment, salary for the expedition, aircraft ticket)

Approximate list of personal equipment you will need for the expedition:

Payment procedure:
Deposit: a non-refundable 2 000 US$ should be paid by transfer to our bank account
before December 15, 2019.Final Payment: total payment for program and any payments for additionally requested services should be made before February 10, 2020.

NOTE:
IF MEMBER FAILS TO DO THE ABOVE MENTIONED PAYMENTS IN DUE TIME,
HIS/HER APPLICATION IS CANCELLED AND ALL PREVIOUS PAYMENTS ARE
NON-REFUNDABLE!!!
ALL YOUR PAYMENTS FOR ANY SERVICE AND EQUIPMENT IS NON-REFUNDABLE,
AFTER FEBRUARY 28, 2020 !
THERE WILL BE NO REFUND IF A MEMBER LEAVES A TRIP FOR ANY REASON
EITHER VOLUNTARILY OR INVOLUNTARILY !
NO REFUND WILL BE MADE FOR ANY SERVICES OR PRODUCTS NOT UTILIZED
INCLUDING BUT NOT LIMITED TO OXYGEN! 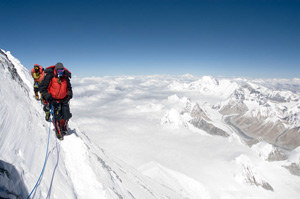 Everest is neither the most beautiful mountain in the world, nor the most difficult to climb but it is the highest peak on the Earth, and as such it is a magnet for all hikers, mountaineers and adventurers from all around the world. Everyone has their own Everest. Only when people reach the top, they realize that the summit itself is not important, and that it is the climb to the top that has completely changed them, and that this journey is actually priceless. See photos from our previous expeditions to this magical mountain.

From Serbia to Tibet

Watch our latest video, “The Rickshaw Race” from the Tibet MTB Expedition!

This is a map of EST Expeditions

Check out where we've been!
Click on the desired region for more details.

You can sign up here for any of the expeditions !